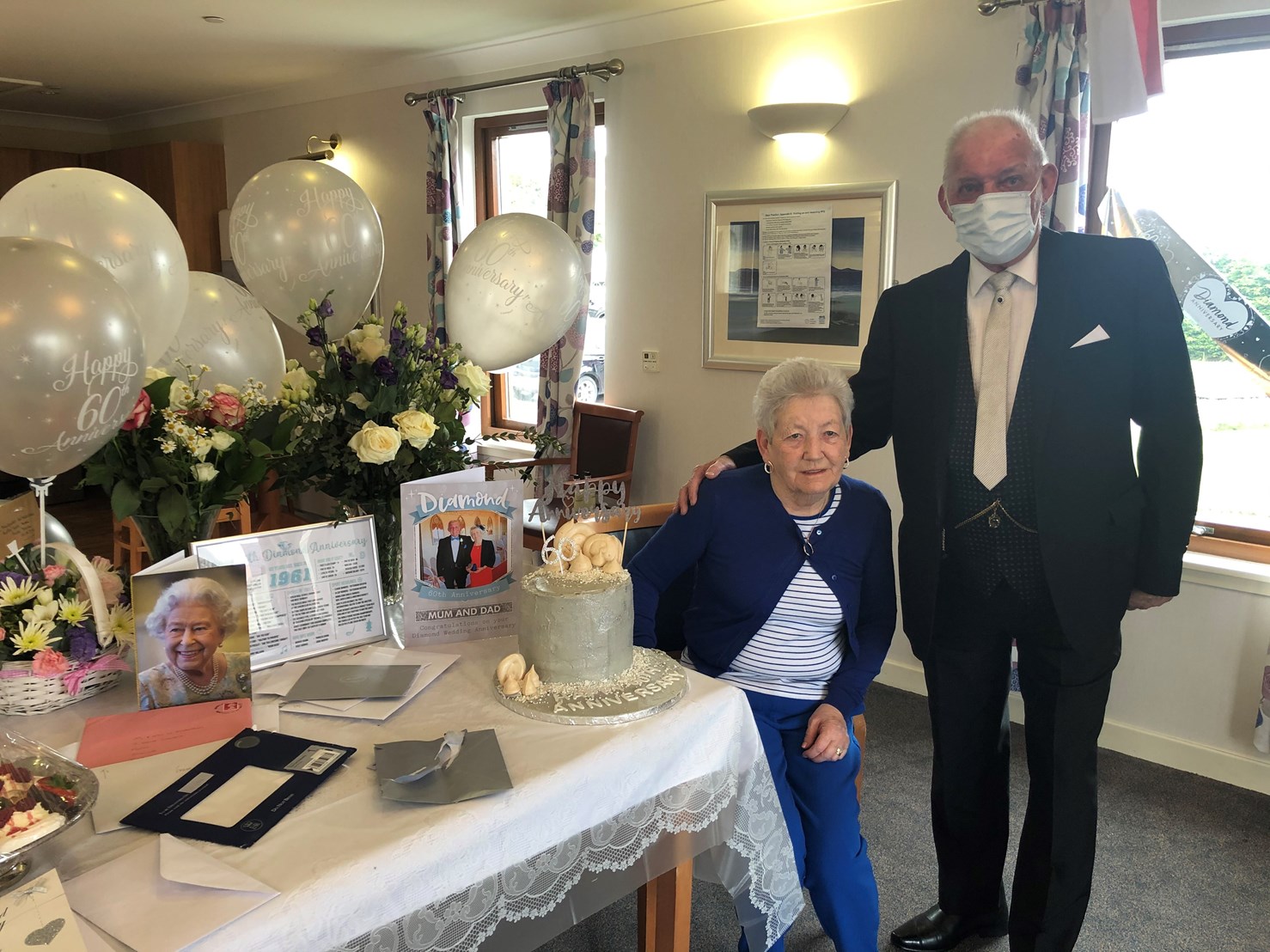 William and Margaret got married in 1961 and have celebrated their diamond wedding anniversary with a reunion at Airthrey Care Home after eight months apart.

William Mcmeechan, 80, and wife Margaret Meldrum, 78, were reunited after being separated for months due to the COVID-19 pandemic, just in time to celebrate 60 years of marriage.

Margaret has lived in Airthrey since July 2020. She had been separated from husband William since last summer. Due to Covid-19 constraints, their only contact during this time was through window visits.

But as restrictions on care home visits were relaxed, William was able to visit Airthrey Care Home so the pair could celebrate their special day together.

William, originally from Fallin and Margaret, originally from Cowie, were married in Cowie Parish Church on 7 April, 1961. After the ceremony, steak pie and drinks were enjoyed at Margaret’s mother’s house.

The couple lost everything they owned in a house fire the previous year, so they were unable to get photography for their wedding day. But the couple’s relationship has been built on supporting each other through the hard times, loving each other deeply, and always talking!

For the anniversary celebrations, staff at Airthrey Care Home decorated the lounge and presented William and Margaret with a gift. The care home’s chef prepared an afternoon tea, which was accompanied by an anniversary cake. The couple also received a message of congratulations and a telegram for their Diamond wedding anniversary from the Queen.

The day was made even more special with congratulations from the couple’s relatives; William and Margaret are very family orientated and have been blessed with five children, James, Ewan, Helen, Thomas and Kirsty. Together they have 14 grandchildren and 16 great grandchildren.

Rebecca McLaughlin, care home manager of Airthrey Care Home said: “Up until March, Margaret and William had only been able to see each other through window visits. As we were able to welcome William to Airthrey, the staff worked so hard to make their day extra special. I can’t think of a nicer thing to celebrate and I wish them many congratulations.

“To be able to reunite Margaret and William for their anniversary was nothing other than amazing. Both of them thoroughly enjoyed the day and their wee smiles said it all. It really meant a lot.”

William and Margaret’s daughter, Helen, said: “Since restrictions have eased, my dad can now visit my mum at Airthrey every week. Being reunited after all this time made their diamond wedding anniversary even more special. Our whole family would like to thank all staff at Airthrey Care Home for everything they did to make their day so enjoyable.”